Zdravko Djordjevic is a regular reviewer for sound effect libraries. His opinion, being a sound designer
and library creator himself,  is something we take very seriously. Here are some excerpts from his review
and below a video he made to showcase our sound effects in use.

Regarding the multi-perspective microphones

"The first two come with three microphone positions (On board, Roadside A and B), each sounding differently.
The on board position is something to look for as it nails the right sound for all four bikes.
Roadside A and B perspective are your standard pass by takes, one being mono and the other one stereo."

On the bonus sounds

"Other sounds included in the library also sound very good and clean, though I will say that I missed some
of the isolated wheel spin sounds in this library. The various bike sounds are some of my favorite sounds
in this library just because they offer a lot of different bicycle sounds which could be layered with the four
main bicycles. You can hear them in the example I made in the last part of the video(below)."

"The library is delivered at 96 kHz and 24 bit which is perfect if you want to pitch and stretch these sounds.
It includes exterior recordings, which at first I was a bit afraid of getting a lot of city, people and/or bird noises.
Happy to report that there are almost none of those in this library which is fricking fantastic.
This could be due to location in which the library was recorded or due to Frick and Traa’s editing skills.
Either way, it sounds really good and instantly usable"

We've always enjoyed the in depth reviews by Alex Gregson who operates 344 Audio.
He's also a sound designer and his invaluable feedback (see below) has made us change some small
things in our metadata and folder structure. Here are some quotes from his review.

"The overall tonal balance and riding performances feel well executed, as does the presentation
- making the library a breeze to use on a deadline."

"City Bicycles is a library that makes you feel like you're present on location, listening to your own bike moving."

"The only constructive criticism we can aim at City Bicycles, is the consistency of presentation
- some folders have short descriptions in their file name. We think keeping these descriptions in the
metadata guide would have been more user friendly."

We are very happy with the reviews and constructive criticism by both reviewers.
We took it to heart and changed parts of our library to better accomodate the needs of their ideal use-case scenario.
The first action was shortening the folder names (to increase compatibility with Windows - we found out the hard way that there still is a 256 character limit to the combined length of pathname & filename in Windows Explorer, even in Windows 10 .
Additionally we've created an 'overview' of the library content in terms of microphone placement and perspectives in an image (see below). You can find all these changes in our new version of the Metadata Reference Guide. 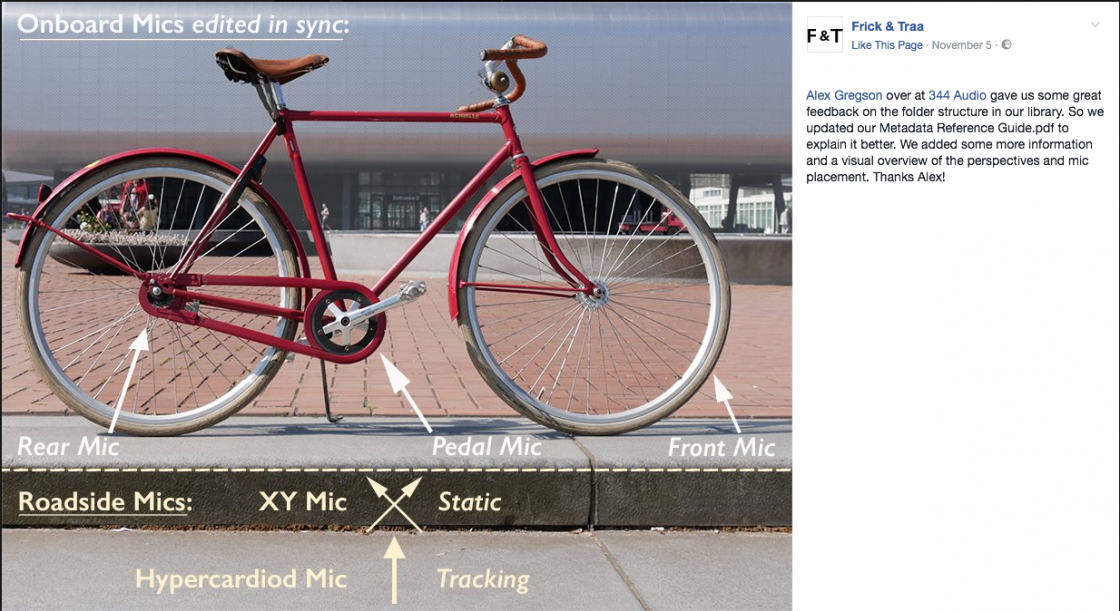